Headliners include Childish Gambino (who has claimed will no longer perform after this tour), Tame Impala, & Ariana Grande. The rest of the weekend(s) feature a relatively diverse lineup, compared to the last couple years, with Janelle Monaé, the 1975, Diplo, Blackpink, Solange, Weezer, Bassnectar, Aphex Twin, Gesaffelstein, Chvrchs, & more!

The crazy thing about Coachella is that it sells out, every year, in the summer BEFORE…so, literally months after the fest, it turns around and sells out a full 6+ months before the lineup comes out! We’ll post some tips on how to grab tickets, if you weren’t ready back in June 2018. You do have a few options, for lodging. There’s camping (our last pick), finding an Airbnb, hotels, and extremely expensive but convenient travel packages. All can be found at coachella.com.

See you out there fellow festival fans! 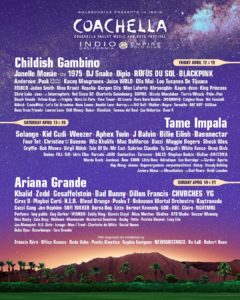