High Water Festival went off without a hitch last weekend and we have the Spotify playlist on repeat. The typically humid Charleston weather held off and gave way to a perfect southern Saturday to kick things off.  With designated off-site parking and school buses to shuttle attendees, getting to the festival was a breeze. Upon entering, guests walked through parts of the old Charleston Naval base which added some historic charm, very fitting for the spirit of High Water. Gorgeous, grand mansions which were once officers’ quarters dotted the walkway into the park, once a golf course used by the navy. Centuries-old oak trees dripping with Spanish Moss shaded guests as they walked through the gates and onto the festival grounds. Upon entering we were greeted with sprawling views of the Cooper River and surrounding marshlands. The energy was high and the surrounding atmosphere felt just right for the lineup of the day.

The food in The Refuge closely rivaled the stunning views. With hundreds of stations from local vendors like Lewis BBQ, Roti Rolls, and Semilla, it was hard to choose just one. It was a good thing the selection was varied and delicious enough to fuel a whole week of rock and roll revelers. Whatever cuisine chosen there were plenty of specialty cocktails and craft beers to pair with it all. A true celebration of food alongside the music.

The tunes kicked off with the twangy rock of Lilly Hiatt whose latest album was produced by festival curators Shovels & Rope. Her distinct Americana sound lured partygoers into the weekend as the crowds started to roll in. She was followed up by Michael Nau, Butch Walker and the Shrimp Family Band who all gave us a mix of poetic folk, romantic rock-pop, and good old fashioned southern rock and roll.

As the sun started to get lower and the temps cooled down, The War and Treaty’s funky bass lines and soulful lyrics got the crowd jamming (and some crying).
Blitzen Trapper, Mitski and Phosphorescent put us all in the true festival spirit and geared us up for a night of indie, folk and girl rock with headliners Lord Huron and Jenny Lewis. 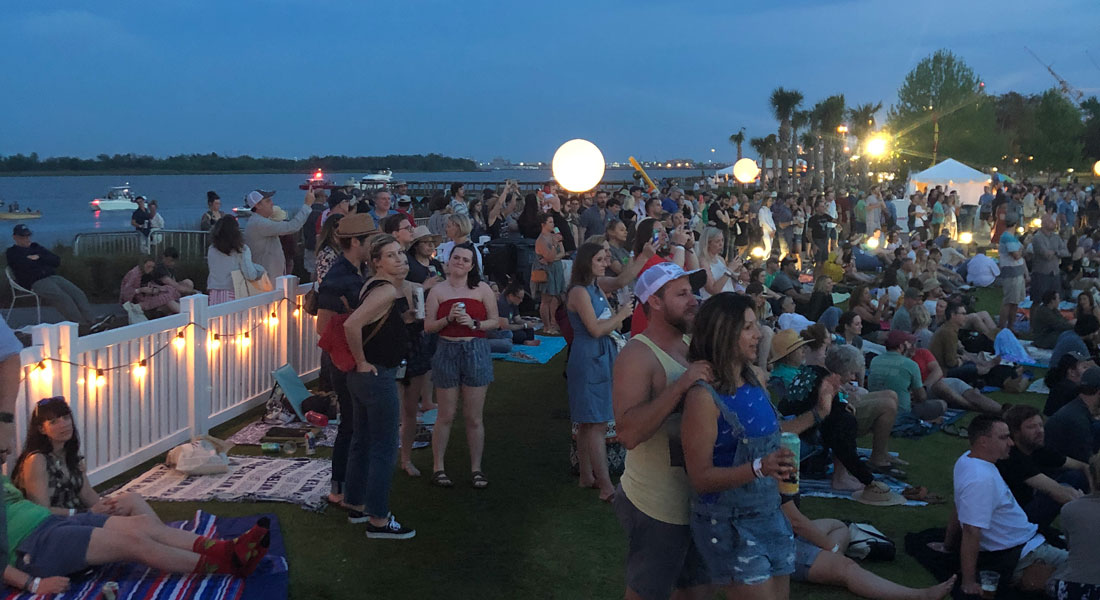 The night ended with the magic of Leon Bridges. The crowd swooned to his sweet soulful R&B as he conjured up the sounds of Otis Redding and Sam Cook with the cunning dance moves of Justin Timberlake. The perfect end to a mind-blowing day of music.

With attendees still buzzing from day one, day two did not disappoint. The Secret Sisters started our day with their heartbreaking genre of country-folk. They provided the perfect Sunday brunch soundtrack and eased us gently into the day. Other highlights included Ranky Tanky, the local jazz quintet followed by the Preservation Hall Jazz Band who gave us a mix of traditional Gullah music and NOLA funk. The true sounds of the South.

Dr. Dog carried the crowd through sunset to the show-stopping Shovels & Rope. Welcomed with a massive roar from the crowd, the duo embodied rock and roll in their matching blue suits and distinct indie folk sound. The night ended with the Seattle-based band the Head and the Heart whose country-rock brand of indie rounded out the weekend perfectly. They were joined briefly by the Preservation Hall Brass Brand who added a jazzy element to their hit song “River and Roads” tying the day together nicely.

As the festival closed and attendees hit the road, we passed an art installation with a quote from Shovels and Rope: “It ain’t what you got, its what you make”. With hearts (and bellies) full and a new summer soundtrack, we left hoping the tradition continues. See you next year High Water.