What is Music Midtown?

The first Music Midtown was held in 1994 as a one-day event with only eight musical acts performed on two stages. That means there were only 16 bands total playing throughout the day/night! This year’s lineup featured 100 different artists and bands across four stages and over 50 hours of music played over the course of three days. Such a strong track record makes it hard to believe that no one has ever attempted to compile all the music that has been played in just one place. Until now!

I spent some time listening to music from Music Midtown’s past and compiled a playlist containing every song that has ever been played. The total length is 58 hours, 3 minutes, 33 seconds. Yes… it took more than three days of music to compile the entire list of music.

Music Midtown was one of the favorite music festivals growing up because people spent time in Piedmont Park with friends, seeing great music all day/night, playing on the swings at Zoo Atlanta before it closed for the year, walking around the Aquarium after dark, and checking out MomoCon (an anime convention) while waiting for music acts to perform during lulls between headliners. It was an event that combined many things that were near and dear to everyone’s heart.

Music Midtown, Atlanta’s music festival, has a long-standing tradition of bringing some of the biggest and best acts to our fair city. For years this event was a multi-day concert with several stages representing every radio station in the area.

This tradition went on hiatus for a bit but the organizers have been working hard to bring it back to its former glory, and the 2012Music Midtown was definitely a sign of that. This year’s lineup was phenomenal and the event was a challenging and beautiful way to spend a weekend.

After a long stint of going to multi-day camping festivals, I had almost forgotten how different city festivals can be. The crowd, the vibe, security…but the biggest difference between a camping fest and a city fest is that you have to worry about logistics like city traffic, rush hour, and transportation.

Music Midtown is in the heart of the city so parking can be a major pain. Pay parking and bike racks were available in some places, though many chose to skip the $20+ parking and just take MARTA.

The trains run every 10-20 minutes so you can catch one with no problem and it only costs $5 a person for a round trip. The ride back is a little crowded but we found it very worth it to leave the cars at home and overindulge in the $10 beers.

Speaking of that, the drinks were everywhere! Vendors with cocktails, giant beers, and craft beers were all set up throughout the venue. After arriving at the festival we found a good spot to chill and took out the tapestry to sit on.

From that point on a beer vendor with a bucket passed every few minutes so it would have been the perfect situation if the drinking of this beer did not inevitably lead to bathroom visits. I’m not sure what was going through the minds of the organizers when they planned the number of available porta-potties but it was ugly.

The lines were out of hand ridiculous and the locations were all far away from the stages. This is the first time I have ever seen two girls actually come to blows over a bathroom if that paints a picture of how bad it was. Hopefully, the Music Midtown folks learn from this mistake and realize that a sold-out crowd and tons of beer vendors equal lots and lots of bathrooms. 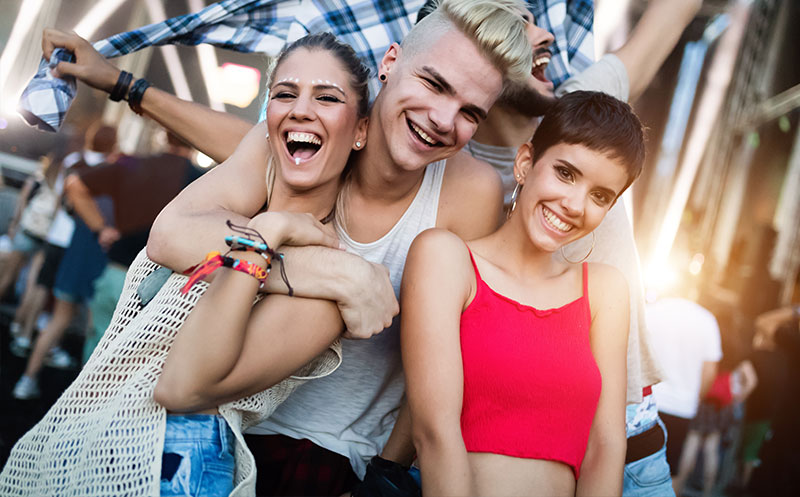 People of all ages were present, including teenagers, middle-aged folks, and even some families. Some liked to get there early and set up a good chill spot while others chose to bounce around from stage to stage. Those of you who remember the “old” Music Midtown will remember the spread-out stages and large venue but this year’s show had two stages that were close together. One set would end then another would begin.

We chose to plot down right in the middle of the two so that we could hear both shows without having to move. This has its benefits, like being able to find your way back to your crew every time without getting lost, or finding friends you are looking for.

Having a home base to kick off your shoes and chill is also nice. If you like to bounce around there are lots to see. You can ride the Ferris wheel, check out the beautiful Atlanta skyline, or just people-watch. So many beautiful people were in attendance at this show, so if you are a single person you could have a hay day in a sea of all the hotties running around.

Besides all the hotties, the main event, the music, was so amazing. The headliners were a huge draw. I mean… The Avett Brothers, Foo Fighters, Ludacris, and of course Pearl Jam. Just hearing the lineup made me smile, so you can imagine the joy of actually getting to see all of these bands in one place. It was a strange experience to see such different acts so close together, you almost had to hit reset on your brain between the shows.

It doesn’t get more opposite than hearing TI sing “Whatever You Like” then turning around 5 minutes later to hear The Avett Brothers with their folk sound belting out “The Fall”, or dancing your ass off to GirlTalk then turning around to get ready for Pearl Jam. The highlight of the weekend for me was watching Joan Jett come out with the Foo Fighters and sing “Bad Reputation”. She is such a legend and the Foo Fighters have become icons of our generation so this collaboration was just plain awesome.

Pearl Jam has not visited Atlanta in a very long time so fans came out of the woodwork to experience this show, and they were not disappointed The band really brought it on the setlist, pulling out some old school and mixing in the new.

It was a great treat to hear them close the weekend with Neil Young’s “Rockin’ in the Free World”.

Here are some tips on surviving the Music Midtown festival:

Music Midtown 2012 was definitely one for the win column, and with its stellar lineup and sold-out ticket sales Atlanta can expect this tradition to continue to grow, I can’t wait for next year!